location SALTWORKS CASTLE
DATE 29 April - 31 August 2022
Fifty works by this internationally acclaimed and one of the most famous Polish naive painters are on display at Wieliczka Saltworks Museum from 29 April to 31 August 2022.
The inspiration for this exhibition came from a painting purchased by the Krakow Saltworks Museum in 2013. In the dark setting of a mine, miners are at work - what could be more typical of a mining museum? And yet, let us not be fooled by the apparent realism and stiffness. On closer inspection the question arises: why are these miners working among dragons or dinosaurs?!
The fantastic animals in the painting created in Katowice in 1967 have numerous non-trivial “siblings” which came from under the brush of Teofil Ociepka (1891-1978), such as basilisks, winged horses, ghosts and even a series of blue Saturn animals!

His original, imaginary landscapes - filled with fantastic flora and fauna combined with motifs from folk beliefs - fascinate and captivate audiences. Ociepka’s colourful and expressive works do not leave anyone indifferent. More than 40 years after his death, the artist has both his sworn lovers, who study the complex occult-symbolic and moralistic meaning of his paintings, and fierce critics, who point out his compositional errors.

The title of the exhibition “From a Dream or From a Spirit?” encourages reflection on the origins of Ociepka’s work, as this self-taught painter, employed in a Silesian mine, indulged in metaphysical pursuits (K. Ochniak-Dudek, Krakow Saltworks Museum in Wieliczka).

Exhibition is organised by the Krakow Saltworks Museum in Wieliczka in cooperation with the Silesian Museum in Katowice.

The Master from Janów - as Teofil Ociepka is often referred to - was born on 24 April 1891 in Janów near Katowice (the so-called urban Janów). He grew up in a typical multi-generational Silesian family with mining traditions. Teofil’s grandfather, uncles and father Piotr worked in the Keiser mine (later Gische and then Wieczorek), with which he was also associated.
Ociepka was shy and distant ever since his childhood. At school he found it difficult to form close relationships with his peers. His vivid imagination, stimulated by his grandparents’ stories about utopce, ghouls and the Treasurer, did not make it any easier for him. He struggled to complete elementary school and could only hope to get a good grade in drawing classes. As all children in Silesia, which at the end of the 19th century was part of the Prussian state, were obliged to attend school, he could speak and write German fairly well, which enabled him to read German books and magazines.

In 1905 his father died in a mining disaster. The family's situation became so difficult that Teofil had to go to work. Because he was frail, working underground was out of the question. With his mother’s help, he got a job as a runner in the town hall, he was also employed in the post office and in an inn. However, all these jobs were temporary. Already before the First World War he started working in the power plant of the Keiser mine and then, until the mobilisation in 1914, on the railway in Mysłowice.

During World War I, Ociepka fought as a soldier in the Prussian army, among others on the southern front. The war had a huge impact on his later life. While in the military hospital, he accidentally came across Athanasius Kircher's treatise: The 72 Names of God. It intensified his interest in secret knowledge and gave impetus to his research.

After the end of the First World War, Ociepka witnessed the nascent Polish statehood and the Silesians’ aspirations to incorporate Silesia into Poland. He took an active part in the First Silesian Uprising. Little is known about what Ociepka did in the interwar period and during the Second World War. It is certain that he returned to the mine and worked as an engineer in the mine's power station until his retirement. He also returned to his occult interests. In 1923 he began exchanging correspondence with Swiss esotericist Filip Hohmann, who then became the painter's master and spiritual guide. It was thanks to him that Ociepka received the status of master of the secret sciences.

In fact, Ociepka became a painter also on the recommendation of his spiritual master. He had never shown any interest in painting before, but despite the difficulties that this mission imposed by Hohmann presented, he systematically worked with great seriousness.
After the war, the cultural and social situation changed. Great numbers of workers’ community centres were being set up and artistic life among the workers was being promoted. One such activity was the organisation in 1946, on the initiative of the trade unions, of an exhibition of miners’ paintings, which also featured Ociepka’s paintings. By a happy twist of fate, the exhibition was visited by Izabela Czajka-Stachowicz, who then organised a solo exhibition for Ociepka in Warsaw in 1948. The painter gained fame and recognition and his paintings found more and more audiences.

In 1946, on the initiative of Otto Klimczok, a well-known social activist, a community centre was set up, followed by a club, which later became a community centre at the Wieczorek mine. Klimczok, who wanted to establish a visual arts section, invited everyone he knew who liked to paint to join him. Among them was Ociepka, but he did not accept the invitation. He was a loner by nature - he painted exclusively at home, where he had his studio and workshop and where he liked to talk about his paintings to anyone who came to him and wanted to listen to stories about the struggle between good and evil, about life on other planets and about treasurers guarding underground treasures.

Just before his retirement, a huge change took place in Ociepka’s life. Unexpectedly, he received a letter from Bydgoszcz in which Julia Ufnal, who like him was interested in metaphysics, confessed that she had received a moral and spiritual instruction to take care of the artist. The couple were married on 18 April 1959. His resourceful wife very quickly took control of all aspects of their life together. The painter broke off contact with his friends, stopped being involved in the occult and moved to Bydgoszcz in 1969.

In 1976, at the age of 85, Teofil Ociepka was awarded the Knight's Cross of the Order of Polonia Restituta. He died two years later on 15 January 1978. In 2016, a memorial to this extraordinary master of imagination was unveiled at Grunwaldzki Square in Katowice in a gallery honouring artists of merit in Katowice. (Sonia Wilk, Silesian Museum in Katowice)


The exhibition presents works by Teofil Ociepka from the collections of: 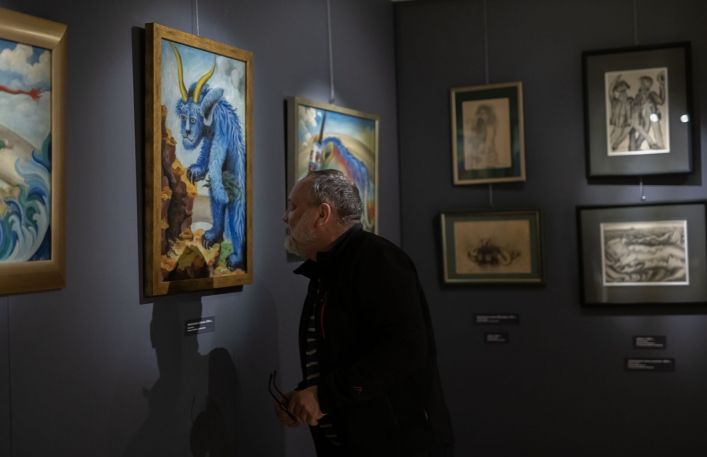 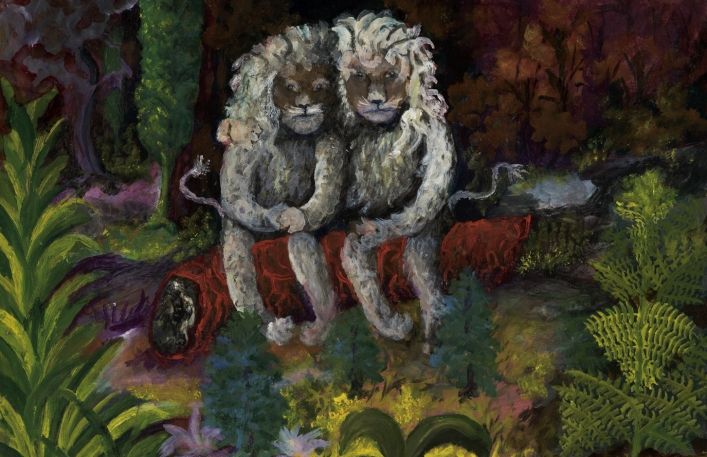 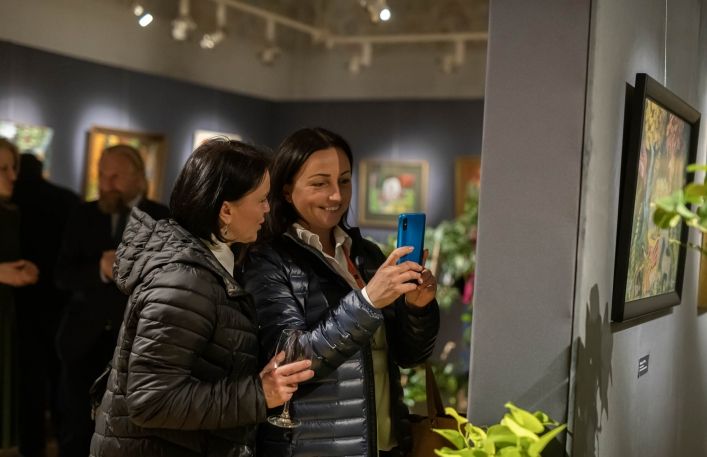 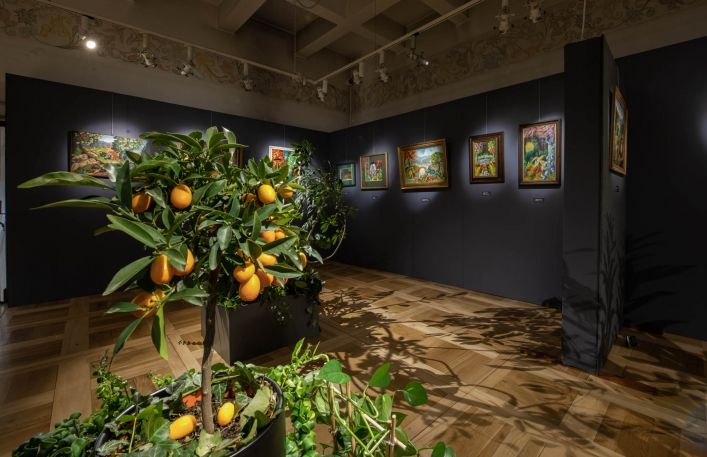 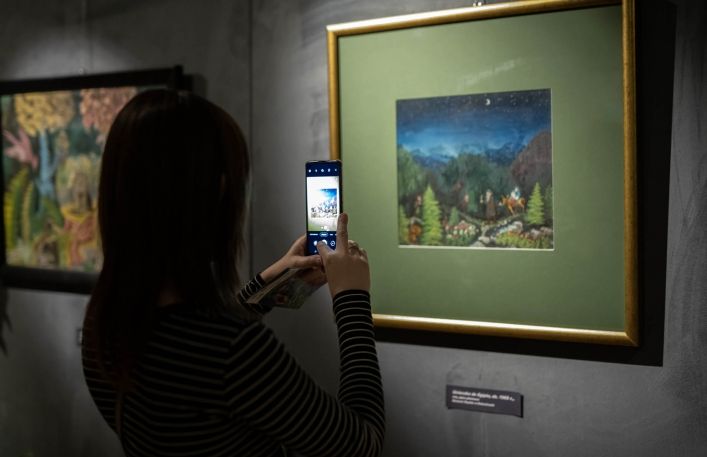 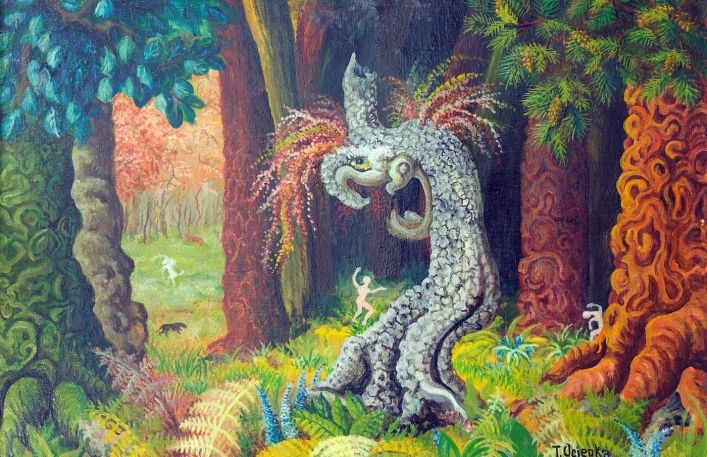 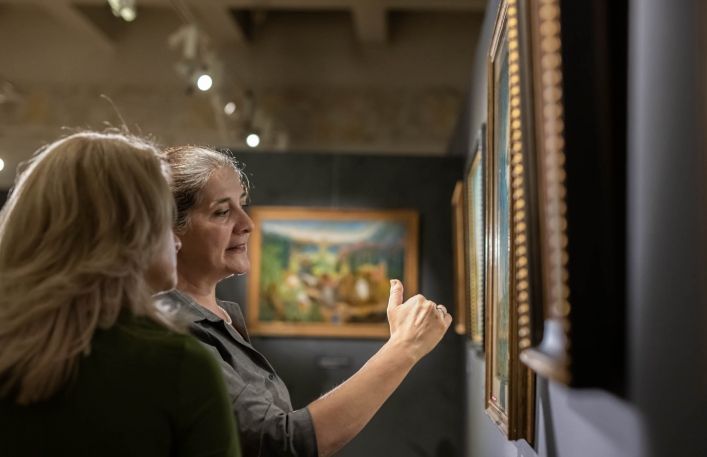 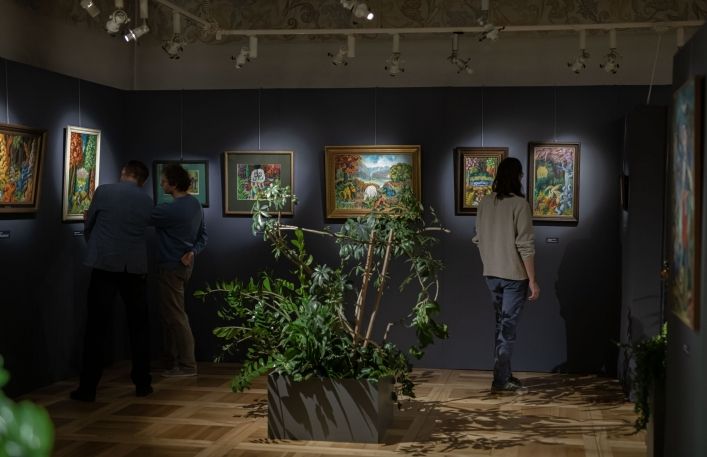 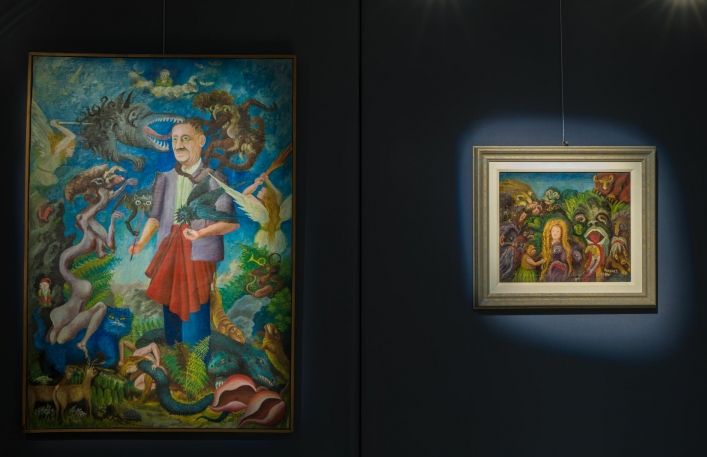 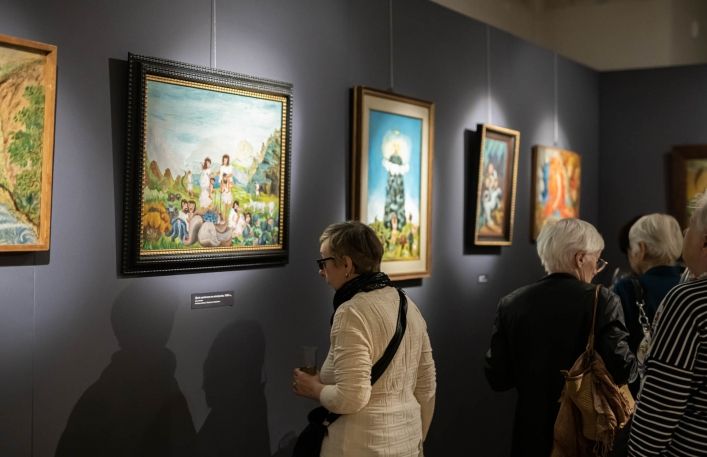 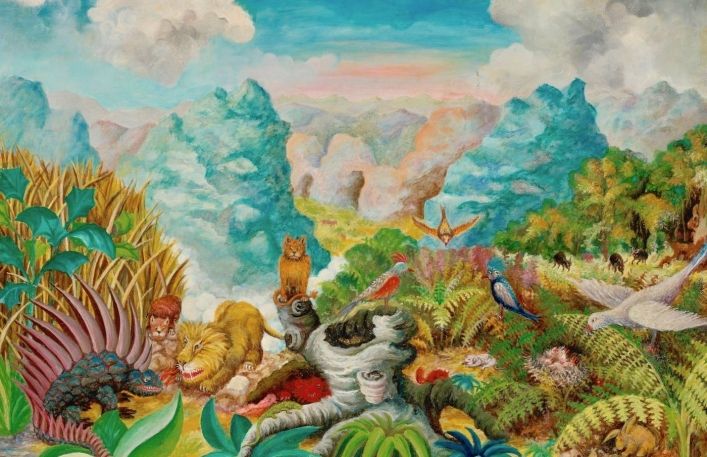 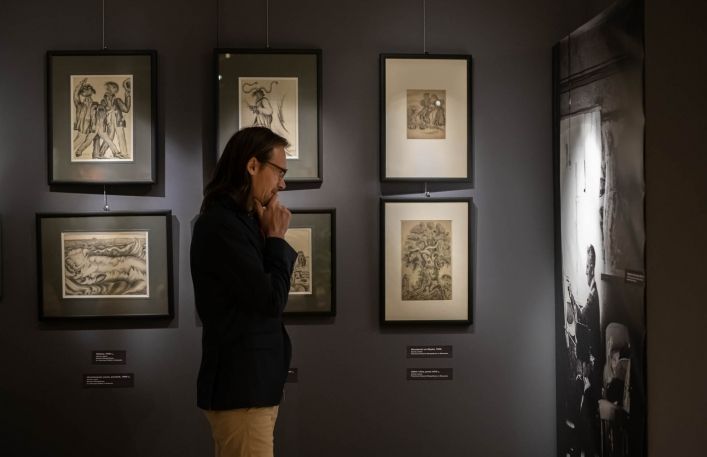