The salt deposit in Wieliczka was formed during the Middle Miocene Period, some 13.5  million years ago when the sea water from neighbouring reservoirs filled the basin at the foot of uplifting mountains.  The sea spread out in eastern and northern directions.
With time, in the warm and windy climate the water evaporated leaving salt sediments along the mountain range – the present Carpathian Mountains. Salt sedimentation was accompanied by volcanic activity resulting in the deposition of volcanic dust, called tuff. The final shape of the deposit was determined by the subsequent orogenic movements of the Carpathian Mountains. As a result of these processes the salt rocks were pushed to the north and the deposit received its specific form. The shallower part of the deposit consists of irregularly scattered lumps of salt which can reach up to several thousand cubic metres in size, and below them are very complicated undulating salt rock layers. No other salt deposit has such a dual composition. The stages of the deposit formation are illustrated on a colourful board and its present form can be seen on the lighted cross-section.

The exhibition presents a great variety of minerals concentration and salt rocks. Both so called “original salts” which date back to the Miocene Period and extremely diversified forms of substantially younger, so called “secondary salts” can be found here. They are composed mainly of the mineral halite which crystallizes from salt water and has the form of transparent cubic crystals ranging in size from a fraction of a millimeter to a dozen or so centimetres. The effects of salt crystallization can be seen on some wooden objects left by miners in the mine (jug, broom) which are covered with glittering minerals, as well as extremely varied in form stalactites, stalagmites and columns. Another impressive sight are so called “salt spruces” which are formed by the expanding net of halite cubes. The colour of the cubes is also a wonder of nature. Another interesting example of mineralogical phenomena are salt filaments, an original form of halite, which is transformed into fibrous salt with time. It can have rusty, golden and blue tint. However, the most attractive are large transparent monocrystals which show the power and creativity of nature. Some of them come form the Crystal Cave which is a unique underground reservation.
The specific conditions in which the deposit was formed were also favourable for the formation of various salt rocks. In horizontal glass cases are presented: the oldest salt, striated green salt, staple shaft salt, striped and “eagle” spiza salt, as well as accompanying rocks: anhydrite shale, mudstone and sandstone. The exhibition also includes deposit rocks: zuber, green salt, “ice” salt and original formations of gypsum and anhydrite.
Some of these names have been invented by miners, but some of them have originated as a result of specialized research and geological descriptions.
The varied salt formations are completed by specimens from the substantially older (around 230 million years ago) cechsztyn deposits of central Poland. These include very attractive specimens of original and secondary salts from Kłodawa, as well as non-existent mines in Inowrocław and Wapno. Next to them are colourful secondary salts from the copper mine in Lubin in Lower Silesia.
Another attraction are paleonthological specimens. Salt rocks containing fossils of corals and cones document former climatic conditions. They survived together with their detailed structure consisting of a subtle net of tiny elements. Impressions of leaves in sandstone are probably the remnant of a small patch of the Miocene forest, and blades of grass in a salt crystal indicate the existence of meadows in the immediate vicinity of the old sea.
Issues connected with salt can be seen on a lighted map presenting the former and present mining and salt-production centers in Poland. 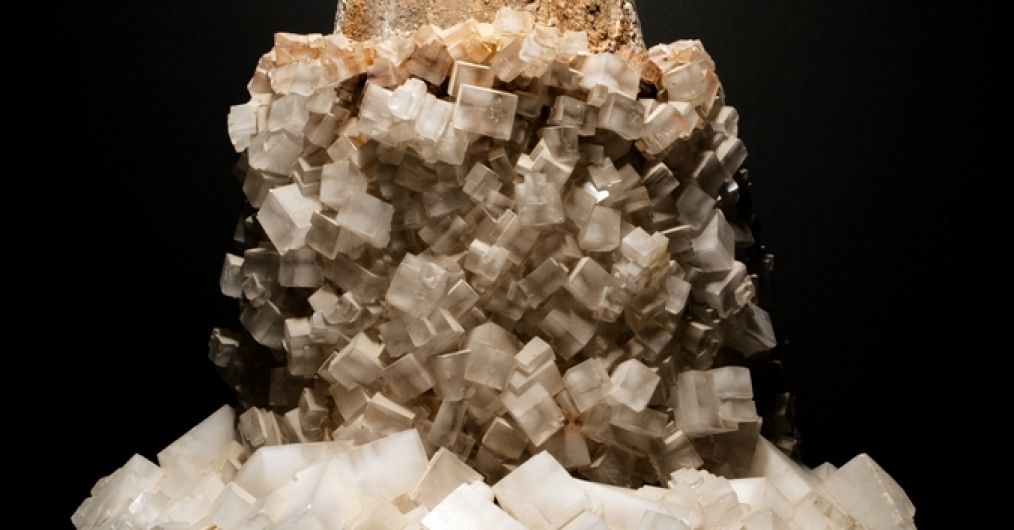