The horse-powered hauling gear called “the Hungarian” is the most advanced machine for vertical transport. It could lift over two tons of load from a depth of over 300 metres. It was an improved version of the Saxon hauling gear which was introduced by the Austrians after the First Partition of Poland in 1772. Since 1861 it was replaced by steam engine machines, and since 1913 by electric powered machines The machine displayed here was used on level I at the Mirów shaft. It consists of a vertical axle with a rope drum (over 3 metres in diameter) which is divided into two parts by a brake disc. The machine was easily maneuvered by four pairs of horses that performed the work.
It has a two-shoed brake operated by a system of levers connected with wooden poles. The construction supports the brake mechanisms and transmission rolls.

On the surface the hauling gears were installed inside a wooden building over the shafts. A model of such construction and hauling machine working over the Wodna Góra shaft can be seen next to the hauling gear. In the back of the chamber are placed smaller transport machines: an over-the-shaft brake wheel, an incline axle, a carriage and brake drum called “the prams”. They were used to lower light output.

In the recess there is a four-armed hand-operated cross with a brake and an over-the-shaft mechanism consisting of two wheels and transmission rolls. It was used for the transportation of light objects.
The display is completed by the 18th century mining carts and over-the shaft reels of various sizes. 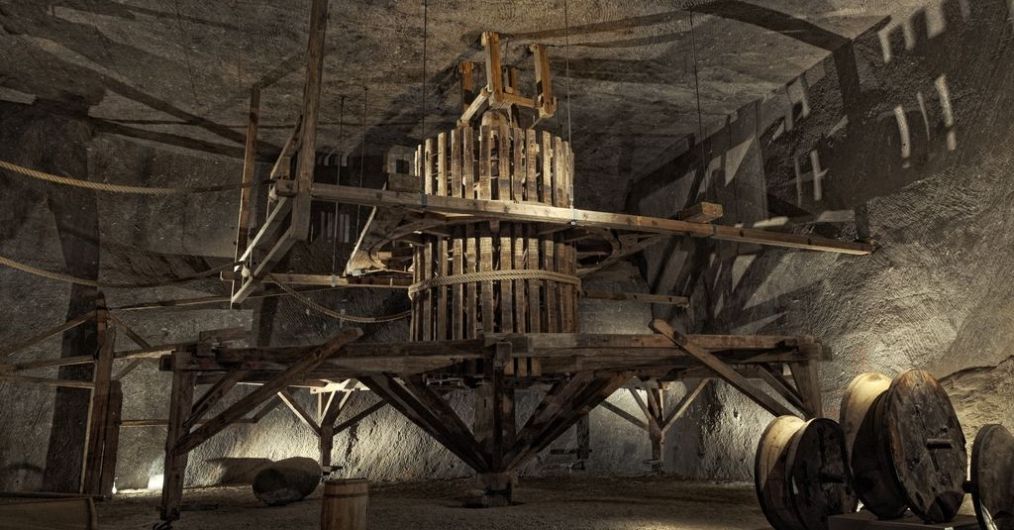